Once both world mission are completed and you receive the IKELOS_HC_v1.0.1 from Ana Bray, she will offer you several quest steps:

Upon successful completion of these steps players can return to Ana Bray to obtain the Sleeper Simulant.

The Sleeper Simulant is an Exotic Linear Fusion Rifle that will be of incredible use for you in various activities in Destiny 2. It comes with the special perk Dornröschen. 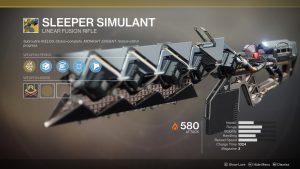 Want to have this amazing Exotic Linear Fusion Rifle for your own account?   Our Guardian.Services team is available to do all of the work for you!

Our team will complete the 2 World Quest Missions, Legacy Code and A Piece of the Past fo you to unlock the quest step Violent Intel. 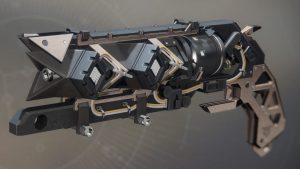 Our team will complete the quest step Violent Intel by killing Hive and Cabal with headshots on Mars with an IKELOS weapon equipped.

Requirement: You need to have an equippable IKELOS Weapon.

Our team will defeat 50 powerful enemies with an IKELOS weapon equipped.

Requirement: You need to have an equippable IKELOS Weapon.

Our team will complete 5 Vanguard  Strikes with an IKELOS weapon equipped.

Requirement: You need to have an equippable IKELOS Weapon. Must be minimum 335+ Power Level.

Our team will complete 3 waves of Escalation Protocol as well obtain and redeem 15 Override Frequencies all with an IKELOS weapon equipped.

Requirement: You need to have an equippable IKELOS Weapon. Must be minimum 345+ Power Level.

Our team will complete the “Will of the Thousands” strike at power level 360 with an IKELOS weapon equipped.

Requirement: You need to have an equippable IKELOS Weapon. Must be minimum 345+ Power Level.

This service is done by account recovery only. Please fill in your login information at checkout so that we can work on your account. We will send notification by email and sms before we sign onto your profile.

Will the full questline give me the Sleeper Simulant?

You must have the Warmind DLC for this service.  We have the DLC licenses on our platforms if you gameshare with a friend for yours.

No, not if it is not specified for a specific quest step. We will use an item manager to view what is available to use.

We get this question all of the time.   We are a completely legitimate website and have accumulated plenty of feedback from satisfied customers.   Check out our feedback section.   The bottom line is we will need your trust to do an account recovery, and all we can do is prove our history with reviews.  You are more than welcome to change your password the moment we tell you that your order is completed.

Season Is Coming To An End

Don’t miss out on collecting your Conqueror Title,  Almighty Title, Felwinter’s Lie and The Fourth Horseman. Get 10% OFF using the code WORTHY10!

All 6 Grandmaster strikes are now available in game. Click HERE to claim your title today!

Lord Saladin is back in the tower!

It’s the final Iron Banner of the Season of the Worthy. Make sure you don’t miss out on the Ritual Bow “Point of the Stag” or that great looking armor set!

Mindbender’s Ambition is available this week!

Final week of the Guardian Games! Do you need a god roll Mindbender’s Ambition?

Trials of Osiris is LIVE!

Looking to go Flawless? Complete the Flawless Seal or perhaps a K/D or Token boost? No Worries we got you covered on all things Trials! 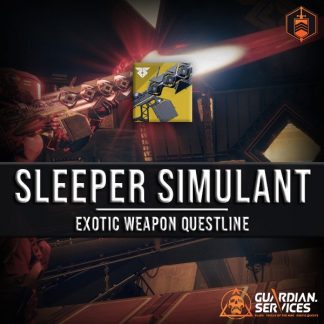 You're viewing: Sleeper Simulant $19.99 – $184.99
Select options
Click here to view what our team recently got for our clients.

Claim Your Conqueror Title TODAY - Use Code WORTHY10 For 10% OFF the Conqueror Seal! Dismiss