If your Trials of Osiris order is affected by the milestone glitch please contact our livechat.

This time around you get your rewards from completing bounties and quests for Lord Saladin in the tower.  These will reward you with powerful gear and the ability to purchase gear directly from Lord Saladin. You get rewarded 5 tokens per win, 2 for a loss.  For every 20 Iron Banner tokens you get one Legendary Iron Engram which drops Iron Banner weapons and armor.

**NEW FOR SEASON OF THE WORTHY**

To acquire the new Iron Banner Armor Set you need to complete the Seasonal Pursuit. This is a long and tough quest and for each step that is completed you will receive armor and weapon rewards, and once you complete all the steps you receive armor drops from playing Iron Banner and turning in tokens.

For our Rank Up service we will obtain the amount of tokens needed for the amount of ranks that you select. We will not use Iron Banner Bounties to complete this service. You need 20 Iron Banner Tokens to turn in for one Legendary Iron Engram which rewards legendary weapon or armor.

For our Bounty Completion service we will complete all 4 Weekly Bounties that Lord Saladin offers. For each bounty you will receive a pinnacle reward and 25 Iron Banner tokens to turn in for Legendary Iron Engrams.

For a list of all the weapons and armor rewards available check below.

Note:
We will not open the bounties unless otherwise specified. Armor will only drop from the Bounties once the Questline has been completed.

The first Iron Banner ritual weapon is here. “Point of the Stag” is a Bow equippable in the Energy slot and does Arc damage. To get this weapon you have to complete the Harness the Elements quest.

Point of the Stag

Claws of the Wolf

Talons of the Eagle

Bite of the Fox

Swarm of the Raven

Roar of the Bear

Breath of the Dragon

This service is done by account recovery only.   Our team will sign onto your profile and complete the service. Make sure you fill out our checkout form with the necessary details.   We will send you a text and email before signing on.

Yes. You need to have the Shadowkeep DLC.

Will you open my bounties?

For our Bounty Completion service we will not open the bounties unless otherwise specified.

Do I require any specific power level?

Yes, your characters needs to be of 900+ Powerlevel.

We get this question all of the time.

We are a completely legitimate website and have accumulated plenty of feedback from satisfied customers.   Check out our feedback section.   The bottom line is we will need your trust to do an account recovery, and all we can do is prove our history with reviews.  You are more than welcome to change your password the moment we tell you that your order is completed. 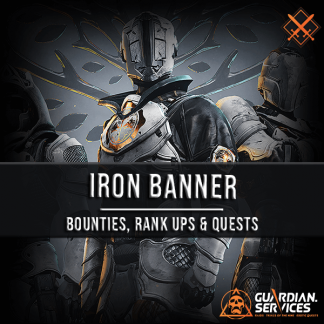 Trials of Osiris is LIVE - If your order is affected by the milestone glitch please contact our livechat. Dismiss